Posted by johnlavinmma on February 22, 2017
Posted in: Uncategorized. 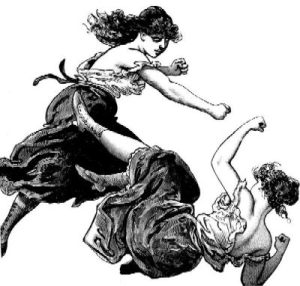 Dearest Odin, I don’t want to write this. This group has already wasted enough of the time of legitimate coaches and by posting this, I may only fuel their awful, awful fire. The average MMA/kickboxing/boxing hobbyist can often remain unscathed but if, however, you are an instructor, it’s very likely this is a person you have run into. Or more accurately, they run into your gym, annoying everyone until you firmly tell them to leave.

This person is the self-professed “Bare Knuckle Boxing” expert. Beware…. The cognitive dissonance is STRONG with these guys.
Where do they come from:
A long time ago, lots of people who didn’t have a lot of friends watched lots of TV. Some of these types saw Patrick Swazye in Roadhouse, and figured they now knew the secret of how to beat 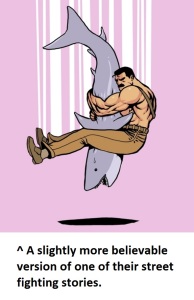 anyone in a ‘real’ fight. They would brag about the 500 street fights they’ve won (there were never any witnesses to these fights, as the witnesses are clearly all dead!)  They would spin tales about the time they “cleared out a room” full of tough guys who got in their way, or maybe they’d tell you all about the time they beat a “Navy SEAL who pulled a knife” on them. For a long time outrageous claims like this were made at bars, gyms, martial arts schools, quinceaneras, bar mitzvahs and family reunions. Unfortunately in 1993, along came MMA, and it became very apparent very quickly that most of these super ultra street fighters were actually just grown men playing make believe. MMA forced these fan boys to come to a HARD realization:  they would never achieve the Swayz’s fighting prowess, nor his fantastic feathered hair.  Most of them grew up a little and quit bragging about that time they knocked out two gang members at once with the same spinning hook kick. But there was a group of hard core hold outs that refused to accept reality. You see, there is very little in this world that hurts an insecure person’s ego more than thinking someone else might beat them up. To them this thought is unacceptable. They had to find some way to rationalize away the obvious fact that they couldn’t win a fight against a boxer/kickboxer/MMA fighter. And then, one day, one Shia Labeouf-ian message board dweller on the internet came up with the ‘bare knuckle’ concept, and an avalanche of other Labeoufs followed him. I also believe Brad Pitt’s character in ‘Snatch’ got this group riled up and somehow worked its way into their mythology.
Their Claim:
Modern Boxing has nothing to do with ‘street boxing’. Modern boxers wear huge pillow gloves, and if they tried to box like that in a street fight, they’d just break their hands, allowing these wise bare knuckle boxers to defeat them.
The butter whales making these claims usually do have calluses on their hands, but the calluses are from playing too much Xbox. Most have never stepped inside of a ring to spar with even a mediocre amateur boxer. Or perhaps they did spar a guy once, and the only way they could save their fragile egos from the epic beating they received is to criticize the other man’s skill as being “worthless” in a street fight.
How do they think they know more than actual professionals???:

I must stress to you that I’m not BS-ing, this is actually what they say: They point to 1800s pre-photograph, hand-drawn illustrations that show boxers taking funny hand positions with their lead arm almost completely extended, with both palms facing up to the ceiling while making fists and claim this is proof of some long forgotten bare knuckle stance (there also are numerous old art prints that show pugilists in the regular boxing stance).  You know what I’m talking about, that old timey pose where the guy has a kick ass mustache and you can clearly tell he handed his top hat and cane to his friend before engaging in some fisticuffs.  Somehow, no professional strikers anywhere in the world have ever heard of this stance, but a bunch of dudes who are banned from ever coming back to the local YMCA Kuk Sol Wan class know all about it.

I’ve had three or four of these unwashed slack jaws walk into my gym over the years. Not one of them has been able to explain the nuts and bolts of how this stance will actually work. They’ll say something vague about using the extended forearms to block and parry punches. Mechanically, they have invented a less effective version of classic Karate ‘hard blocks’. When you ask them to get on the mat and demonstrate this blocking system while you throw punches at them they start to get skittish. They make the assertion that the classic covering position in boxing will just result in your own knuckles bouncing off your head. You might then show them how to modify the classic cover position so your wrists are on your head or you use open palms on your head (every boxer ever knows this).  Having no reasonable response, they tend to trail off after that.

Now, here’s the real kicker. Their whole idea that there is this secret thing that works bare knuckle that won’t work with gloves on is provably untrue. This isn’t some mystery that we can’t solve. Every Kyokushin fight ever is bare knuckle.  I’ve fought two separate matches without gloves on & I’m just some nobody. There are TONS of bare knuckle prize fights that are easy to find online. Every single bare knuckle match I’ve ever seen, either in person or on video, that was won in a standing position, was won by a person who applied basic boxing. Obviously, there is some truth to the fact that you need to be more discriminating with your punches so you don’t ram your bare fist into the top of the other fighter’s head repeatedly. You end up ‘picking your shots’ a little more carefully. All this results in is both boxers doing almost all the same things, but with a slightly lower volume of strikes.
There is no better example of what actual bare knuckle prize

fighting looks like then Wanderlei Silva’s run in World Vale Tudo. What is this you ask? It was a bare knuckle MMA event back when MMA was called NHB. This is what all those bare knuckle fetishists have been waiting for: Skilled bare knuckle matches! 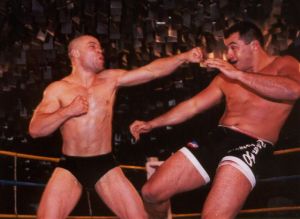 Unfortunately for them, it looks exactly like regular boxing/mma and nothing like the baloney they’ve been spouting.  What puzzles me is even a casual google search of the words “Bare knuckle fights” will lead you to World Vale Tudo. Also, there’s Bando out in Myanmar, literally an entire sport of bare knuckle kickboxing and guess what? It looks 99% like normal kickboxing.

The internet age mixed with everyone having a camcorder in their phone makes a video of almost anything available. Google “monkey rides backwards on baby pig”. There are two different videos of two different sets of animals doing this. Do you understand how crazy uncommon it is for a monkey to ride backwards on a baby pig?! And yet it was filmed on two separate occasions. That is how much stuff is being filmed. Every time two middle schoolers get in a slap match someone pulls out a camera phone. Now try to find video of someone applying the goofy ye old boxing stance. I’ll wait. Not ONE video, huh? This stance ISN’T a real thing. This is confirmable. Even with common sense, video evidence, and reality disproving these men’s claims, they persist.

In a strange way, these men actually inspire me. This level of reality-defying confidence is tough to come by. If I had this type of confidence I think I would have grown up to become the president or something.  These basement dwellers really think that they are going to defeat a bigger, stronger, faster athlete, who practices nothing but punching and kicking against other guys who spend all their time practicing punching and kicking, armed only with super secrets that they discovered by looking at hand drawn illustrations from a time when people smoked cigarettes to “open up their lungs”

Here’s to you, bare knuckled “fighters”, you make the world a better place. 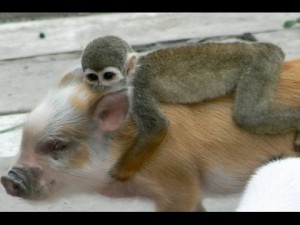 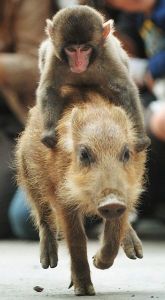